A huge well done to Jordan Marsden on received the Inspirational Young People’s accolade at the annual EAHC (Every Action Has Consequences) charity awards recently. 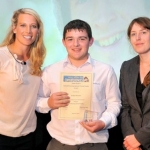 Jordan, who is 17 and the former Chair of our Your Voice Board working with us and Hyndburn Homes helping to develop ideas into projects to benefit the community, really is an inspiration to young people in the borough.  He also continues to put others first by volunteering at White Ash Primary School, where he helps to provide support to young people with disabilities.

EAHC was set up in memory of Adam Rodgers, aged 24, who was tragically killed by a single punch during a random attack in Blackburn in 2009.

The charity, led by parents Dave and Pat, aims to educate young people about the consequences of binge drinking and casual attitudes to violence – and their workshops are used as part of our No Way Out Project delivered in schools.  The ceremony celebrates inspirational young people across Lancashire in Adam’s memory.  Jordan was nominated by co-organiser of the Your Voice Board and ASB Officer at Hyndburn Homes, Wayne Smith-Clarke.

The awards evening was held at Dunkenhalgh Hotel in Clayton-Le-Moors  on 23rd September and Jordan was honoured in the Volunteering and Communities category, which was presented by England women’s football international, Rachel Brown-Finnis.

Jordan said: ‘ I was really shocked, it took me a few seconds to realise – I really didn’t expect it.

‘I just enjoy getting out there and doing stuff – it doesn’t bother me not being paid because I can get more experience and skills.’

Well done Jordan, you really deserve to be recognised for all of your good work.  Keep it up.

There’s more on the story on the Hyndburn Homes website