We held another successful No Way Out day at The Hollins Technology College on 23rd March.  Year 8 pupils were given the opportunity to hear some real-life experiences and find out what prison life is really like.  Through the various sessions we talked to them about violent crime and the consequences for perpetrators and victims.  We were given a warm welcome, as always and Year 8 did the school proud with insightful questions and great engagement in the sessions throughout the day.  Some of the quotes from students on the day include:

Thank you, I would love to have another of these days

I enjoyed everything. I particularly liked meeting past criminals and learning from their stories 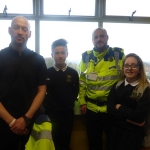 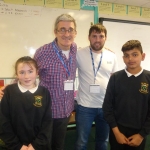 One of the parents also contacted us the following day and had this to say:

Just thought I would let you know that my daughter and her friends were very impressed by the workshops delivered at Hollins Technology College today,

They told me that the guys were pretty cool and didn’t look sketchy or like tramps like most people would expect drug addicts to look like (their words not mine!) They told me that the talk was really interesting and not boring like they thought it would be and how much they really enjoyed it, they also said how awful it was that drugs could turn really nice people (who don’t look like perverts or serial killers) into nasty violent thugs. I believe that one girl even cried!

I have to say that this has by far been the most interesting drive home from the school run that I have had in a long time and between my daughter and her two friends, I am usually lucky if they can remember what they had for their dinner, so a huge impression has been made on them today.

Thanks to everyone involved in delivery and to  all staff and pupils at The Hollins.  See you in June for Know Fear! 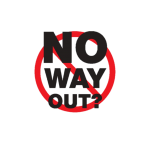