#ourheroBreaks was one of over 900 participants who took part in the 34th annual Marathon des Sables. We would like to say congratulations and a massive thank you to Paul on completing this monumental race. It is an amazing achievement for anyone to complete a single marathon but running the equivalent (and more) every day for 6 days, it truly does take a unique individual to accomplish such a feat. 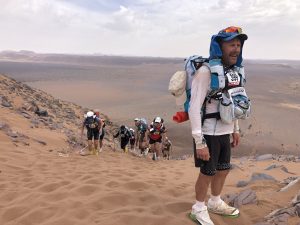 In what has been described as the toughest footrace on earth, Paul ran 250 kilometres across the Sahara Desert to cross the finish line of the legendary ultra-marathon. With the sun reaching 50 degrees centigrade in the Saharan Desert, this makes for very demanding conditions for anyone running in the marathon. Scathing clouds of sand tormenting runners as they traverse the desert, with endless dunes and rocky terrain biting at the feet of the runners.

So, Paul was it harder than you thought?

Well every day brought its own challenges. Whether it was the heat on the day or 8 miles through the dunes on day two, which were the size of tower blocks, having already trekked 8 miles to get to them. 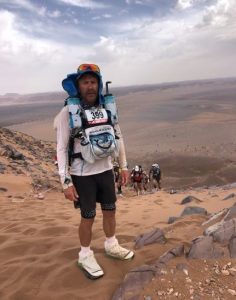 What was the hardest part of the marathon?

Nothing compared to day 4. We set off at 8.30 am on a Thursday and got to the new camp at 8.00am Friday. Trekking through the night over high and rough terrain using head torches. Then as dawn broke, we thought the worst was over, then they chucked in a climb twice as high as the Coppice for good measure! 50 miles in all!!

That sounds like an extremely tough day! How did you cope after that?

The 6th day was a 26-mile trek, we were feeling so happy having completed day 4, so found it ok, especially as there was a winners medal at the end of it.

How would you sum up the Marathon des Sables?

As I was told in the training camp in January, the Marathon des Sables is about just four words:
“Eat, run, sleep, repeat!!” 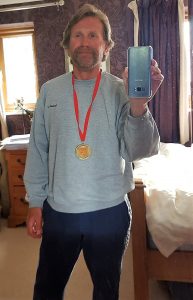 We would like to thank Paul again for taking on the Marathon des Sables on behalf of Ynot Aspire and to all those who sponsored Paul’s trek through the Sahara. Paul’s fundraising efforts have raised over £6,500 for Ynot Aspire and, if we add what was raised through the Inaugural Ball, that brings the total to over £11,500. The funds raised by Paul will go towards our projects within the local community, giving local young people the chance to reach their fullest potential and achieve their aspirations.

In addition to Paul’s amazing accomplishment of completing the Marathon des Sables, he would also like to sponsor a person from Accrington each year to compete in the Marathon des Sables, to raise funds for Ynot Aspire. He’s already found someone for next year, but do you think you could have what it takes to run over the white hot sands of the Sahara Desert? If so, please get in touch with us:

This website uses cookies to improve your experience while you navigate through the website. Out of these, the cookies that are categorized as necessary are stored on your browser as they are essential for the working of basic functionalities of the website. We also use third-party cookies that help us analyze and understand how you use this website. These cookies will be stored in your browser only with your consent. You also have the option to opt-out of these cookies. But opting out of some of these cookies may affect your browsing experience.
Necessary Always Enabled

Any cookies that may not be particularly necessary for the website to function and is used specifically to collect user personal data via analytics, ads, other embedded contents are termed as non-necessary cookies. It is mandatory to procure user consent prior to running these cookies on your website.